The Chestnut Hill Skyspace, Greet the Light, is a permanent art installation in the Chestnut Hill Friends Meetinghouse. Skyspaces, rooms with an aperture in the ceiling through which the sky appears curiously closer, have been commissioned by contemporary art enthusiasts and museums around the globe. Cove lighting, which James Turrell designed to highlight and complement the natural light, has been programmed by the artist to subtly emphasize how we perceive light and space. The light changes with the seasons and time of day, most dramatically at dawn and dusk, rewarding repeat visitors with different experiences. The Skyspace is open to the public at designated times every week throughout the year, weather permitting, but not during Sunday worship services.

Local artist Stuart Shils, a frequent visitor to the Skyspace, has this to say about this installation: “Skyspace in Chestnut Hill is like taking an hour’s departure from all that is familiar, and stepping deliciously into another world of the mind and senses. Yet it isn’t another world at all, but perhaps a carefully shaped portal that takes us deeper into our own world, slowly and powerfully, in a way that good art is capable of achieving. Yes, Skyspace is a work of art, but not like conventional painting or sculpture. Here, we are required to give ourselves up, to make the commitment for an hour to unplug, slow down and disengage from everything outside the Meetinghouse doors and, as the Beatles described in the 60’s, “drift downstream.” One doesn’t go there to ’observe‘ an object as in a museum experience, but to be connected to an expanding moment, to be part of the flow of time and light. I know, if you haven’t yet been there yet this sounds mystical and in a way it is. The experience of Skyspace is very different from most of what we encounter in the course of a day, and for me akin to having some kind of very extreme sensory and cerebral shower from which I emerge reconstructed, refocused and full of joy.”

Local architect James Bradberry, who has designed several buildings for Quaker institutions in the Philadelphia area, worked with Turrell and Chestnut Hill Meeting members to design the new meetinghouse as a modern expression of simple, traditional Quaker architecture. The grounds around the meetinghouse, which is built on a former quarry, offer simple, natural landscaping and use new, environmentally sound techniques of stormwater management. Paths will eventually be built on the site to connect it formally to trails in Fairmount Park.

Built in 1931, the former Chestnut Hill Friends meetinghouse could no longer meet the needs of its growing Quaker community. The old building’s severely restricted driveway access during the week made it difficult for people with disabilities to enter or maneuver within the building. Additionally, the building could not be expanded or renovated in a way that would meet the needs of our older members as they aged, or those of our expanding numbers of young families. These shortcomings limited the Meeting’s outreach programs. After many years of consideration, the Meeting decided to build a simple, two-story L-shaped building using environmentally friendly and sustainable building practices and materials on a partially wooded 1.8 acre-site on Mermaid Lane close to the location of the former meetinghouse. The new meetinghouse will allow Chestnut Hill Friends to better host a variety of community projects like the Philadelphia Interfaith Hospitality Network, Mt. Airy Learning Tree, and other local organizations with which the meeting has long been involved. The project has received support from many groups, including Friends of the Wissahickon and the Chestnut Hill Community Association.

Construction of the meetinghouse began in August of 2012, and, was finished a year later. 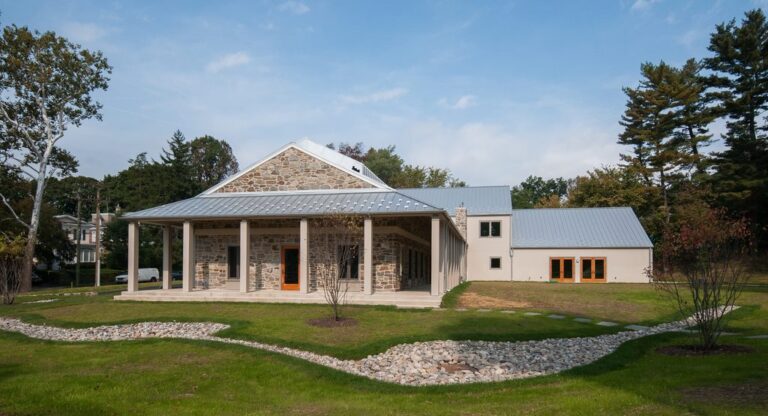 Located between Mt. Airy & Chestnut Hill in Northwest Philadelphia, the Skyspace at the Chestnut Hill Friends Meeting offers visitors from all walks of life a place of peace.

Stay up to date

Please enter your email address below to sign up for E-mail updates.